Facebook Live video clips of a Thai father filmed himself killing his 11-month-old daughter in two video clips posted on Facebook before committing suicide have gone viral before being removed by the social networking site.

The first video had drawn 112,000 views by mid-afternoon on Tuesday, while the second video showed 258,000 views, as they were accessible on his Facebook page for roughly 24 hours.

The father Wuttisan Wongtalay tying a rope to his daughter Natalie’s neck before dropping the child, dressed in a bright pink dress, from the rooftop of a deserted building in the seaside town of Phuket.

It was said  that he was paranoid about “his wife leaving him and not loving him,” Jullaus told Reuters

“This is an appalling incident and our hearts go out to the family of the victim,” a Singapore-based Facebook spokesman said in an email to Reuters. “There is absolutely no place for content of this kind on Facebook and it has now been removed.”

Last week, Facebook said it was reviewing how it monitored violent footage and other objectionable material after a posting of the fatal shooting of a man in Cleveland, Ohio was visible for two hours before being taken down. 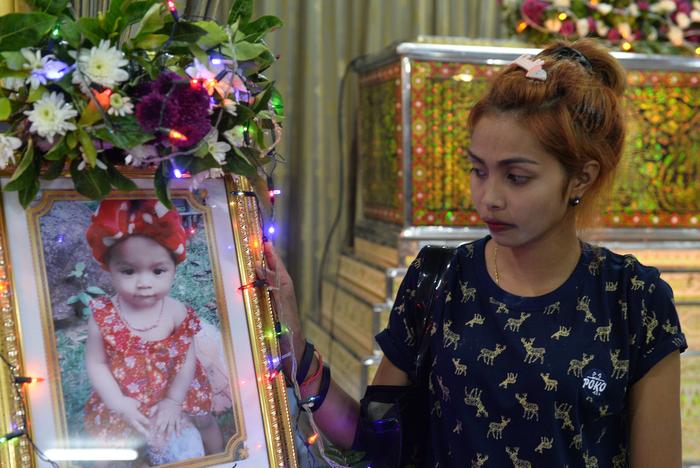 Wuttisan’s wife, Jiranuch Triratana told interviewers that she had lived with him for over a year. What started as a normal, loving relationship grew into an abusive one where her husband would attack her five-year old son from a pervious marriage.

She had her suspicions that something was wrong on Tuesday when she found both her husband and young daughter missing from their home, so she went to look for them.

“I was afraid he would hurt our daughter even though he loved her,” she told Reuters by phone from the funeral.

Thailand’s Ministry of Digital Economy said it contacted Facebook on Tuesday afternoon about removing the videos, after receiving a police request.

“We will not be able to press charges against Facebook, because Facebook is the service provider and they acted according to their protocol when we sent our request. They cooperated very well.”

Facebook are known to be heavily investing in the identification and removal of inappropriate videos on the site, after so many witnessed the horror of the Cleveland killing, Chief Executive Mark Zuckerberg said Facebook would do all it could to prevent such content in the future.

Various Thai viewers have spoken out in disgust and anguish over the clips:

“This is the most evil clip I’ve seen in my life,” said one user, Avada Teeraponkoon. “I couldn’t stand it for more than one second.”

“How can he watch his own child stop breathing?” said another, Rujirek Polglang. “He should have just died alone.”

It is the first killing in Thailand to be broadcast on social media, following the pattern of the Cleveland shootings. Police are worried that this trend may become more apparent around the world and are working closely with Facebook to prevent this.