Islamic State has claimed they were the ones who carried out the bombing just after Ariana Grande left the stage at the Manchester Arena. British Prime Minister Theresa May has called for a high alert security threat in the country.  The security levels have raised from “severe” to “critical”, the highest leveled security threat. May has deployed military to protect public events like concerts and sporting events.

The Manchester Arena bombings have left 22 people dead, including children and teens. The man that carried out the attack, Salman Albedi, was a citizen in the UK. We must now think about the future of our borders and who we let into our countries but not forget that domestic terrorism is a major problem since ISIS can recruit people from all over the world using the internet.

“May announced the move after chairing an emergency meeting of her security cabinet and concluding that the attacker who carried out Monday’s bombing may have been part of a wider network that is poised to strike again. The decision, she said, was “a proportionate and sensible response to the threat that our security experts judge we face.” – Washington Post

Note, in the recent election in France, people were voting for Le Pen because of her closed border policy to attempt the stop the spread of terrorism. After her loss of the election, many people feared that Centrist Prime Minister Macron will keep the borders open allowing more terrorism to flow into their country.

This has been called the worst terror attacks in England for more than a decade, and it was caused by Salman Albedi, a soldier of the Islamic State.

“Getting a car or a knife is easy, making a bomb that works and goes off when you want it to go off takes preparation and practice. And it usually involves other people.” – Raffaello Pantucci 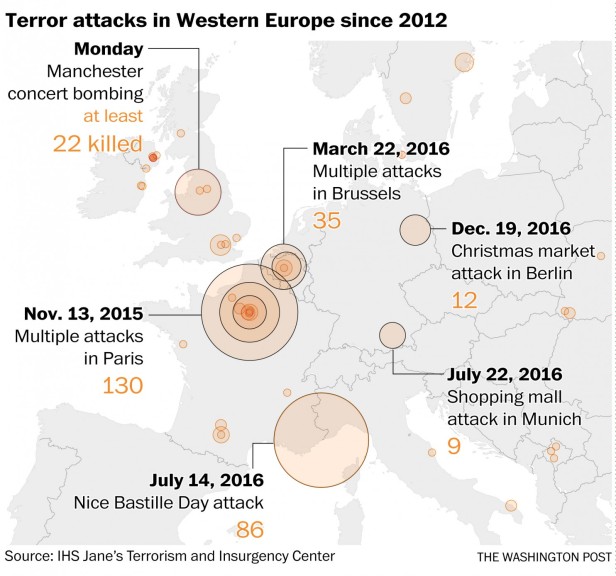 Police have been on the search for the 23 year old terrorist with great evidence that he carried out the attack. Albedi was residing in South Manchester with connection to the bombing. Police then carried out searches in two more homes in the suburban part of South Manchester.  English intelligence categorized him as a “British citizen of Libyan descent”. A friend of the family said Albedi had flew back and forth from England to Libya a large number of times. A clue that could show he was trained by ISIS recruitment.